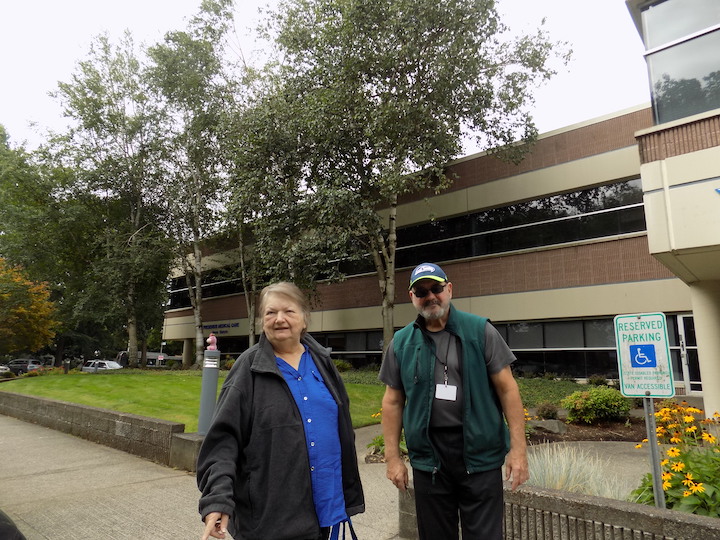 We were thrilled to be in the following article written by Patty Hastings at the Columbian:

CAMAS — For residents at Crown Villa, a 62-and-older apartment building in Camas, a trip to the Walmart Supercenter is about more than shopping. It’s a chance for the tight-knit group to socialize.

They get what they need, eat fries at Burger King — and there’s a lot of laughter, said Geno Pensanti.

“It’s our way of being totally independent,” he said.

Their 5-mile ride to Walmart on Friday was courtesy of Volunteers in Motion, a new program from the Vancouver-based Human Services Council. Volunteer drivers shuttle seniors and people with disabilities to the places they need to go for free.

It’s one of the ways the Human Services Council is shifting gears. The long-standing nonprofit is focusing on transportation services and will change its name in the coming months to reflect that.

“With the shift in our mission to address community transportation, we really feel like the Human Services Council doesn’t tell people what we do,” said Executive Director Colleen Kuhn. “As a nonprofit we just really want to make sure that people know what we’re doing and that our name better reflects what we’re doing.”

While that name has stuck for a while, Kuhn said, the organization is often confused with the state Department of Social and Health Services and other government agencies. The Human Services Council looks to have a new name selected by the end of January.

The organization has actually gone through several name changes. Originally formed in 1946 as the Clark County Council of Community Agencies, it expanded and reorganized in 1951 as the Vancouver Council of Social Agencies. It became a nonprofit in 1957. The name changed to Health and Welfare Planning Council in 1966. Then, in 1990, it became the Human Services Council.

Over the years, it’s added transportation services such as its Bike to Work program and rides to medical appointments. While C-Tran is the primary fixed-route and paratransit provider, the Human Services Council looks to address other transportation needs and gaps in services.

“We know we do transportation well. We know we coordinate services well with our community partners,” Kuhn said.

With more focus being put on transportation, the Human Services Council discontinued its Volunteer Connections program that connected people to volunteer opportunities. It’s still operating the Retired and Senior Volunteer Program through the end of March, when a grant ends.

Kuhn said the funding received for Volunteer Connections wasn’t sustainable and the organization plans to refer people to other groups. It was a difficult decision to reign in those volunteer programs, she said, describing it as a big shift but the right shift at the right time. Websites volunteermatch.com, handsonportland.org and unitedway.org have search engines for finding volunteer activities.

“We’ve got a lot going on. And in the midst of this, we’re really recognizing the need for transportation. That’s increased and will continue to increase for our aging population,” Kuhn said.

The nonprofit’s strategic plan calls for growing services, whether that means expanding into other counties or adding new services.

Volunteers in Motion is its newest program. In its first two months, volunteers provided 200 trips for people in Clark County who have no other means of getting where they need to go.

Joanne Pritchard became a volunteer driver two weeks ago. A retired school bus driver, she learned about the program at the Vancouver Peace and Justice Fair this summer and later signed up.

Volunteers in Motion has six volunteers so far and it aims to recruit 50 in the program’s first year. Volunteers go through trainings, a background check and their motor vehicle records are checked. If they’re using their own vehicle, it’s inspected, too.

Program manager Jeananne Edwards said Volunteers in Motion is a way to ensure people aren’t isolated, that they’re getting out in their community. C-Tran, a major partner of the nonprofit, donated two minivans and the Human Services Council is in the process of purchasing a wheelchair accessible vehicle. The cost of the new vehicle and fuel for the minivans is covered through a C-Tran contract.

Bill Baumann, mobility coordinator at the Human Services Council, said having transportation available allows people to “live full and healthy lives.” A community can have great services and amenities, but what’s the point if people can’t get to them? Getting around car-centric Clark County can be challenging for seniors and people with disabilities.

“You don’t realize how important transportation is until you don’t have it,” Baumann said.

Kuhn said Volunteers in Motion allowed people to get off the waiting list for Reserve-a-Ride Transportation, a program funded through the Washington State Department of Transportation that gets people to medical appointments and other services.

The Human Services Council also plans to work with agencies such as WorkSource and Goodwill Job Connection to train people to become professional paid drivers. Transit agencies and private companies such as Golden Chariot or Mercy 1 Transportation are challenged with recruiting drivers, Kuhn said.

Do those private companies and public entities like C-Tran compete with what the Human Services Council is trying to do?

“Quite frankly, the need is so significant that there’s enough to keep everybody busy,” Kuhn said.

Need to get from Point A to Point B? The Trip Resource Center is your first step.

Stay in the Know